Disneyland’s churro toffee is one of my favorite treats in the parks! If you know my mother and I we are Disneyland and Disney treat fanatics! Our churro toffee is a copycat recipe we came up with and it tastes just like the real deal—crispy buttery toffee with toasted almonds in it all coated in white chocolate and cinnamon sugar. The last time I was at Disneyland I saw several of the candy makers making the churro toffee so I studied up on some of their techniques to make this toffee as authentic as possible! Here’s a picture of THE churro toffee straight from the glass case!

Where to find churro toffee at Disneyland

If you’re visiting the Disney parks soon you can find churro toffee at a few different locations in the parks in Disneyland you can find it at Candy Palace on Main Street and Pooh Corner in Critter Country. In California Adventure it’s available at Trolley Treats on Buena Vista Street. Don’t worry if you don’t have a ticket, you can also buy it at Marceline’s in Downtown Disney!

Your first step to making this toffee is toasting the almonds. When you toast the almonds it brings out the nutty flavor and also makes them crunchier. If we didn’t toast them they might end up a little soggy tasting in the toffee. To toast the almonds you’ll simply bake them at 350 degrees Fahrenheit for 9-10 minutes. Keep your eye on them though, you don’t want them to burn! After they’re toasted, let them cool completely before chopping them up into little bits. You’ll then want to spread them out evenly across your lined baking sheet so that when you pour your toffee over top of the almonds they are evenly dispersed through out your toffee.

Boil it up: Making the Toffee You’ll then add your butter, water, and sugars to a heavy bottomed pan and bring it to a boil. Make sure you stir it constantly, you don’t want any of it to stick to the bottom of the pan and burn. Boil it until your mixture reaches 300 degrees which is also called “hard crack stage.”

Pour and Slice Your Toffee Once your hit that 300 degree mark you’ll remove your toffee from the heat, quickly stir in your baking soda, and then pour it over top of your chopped almonds. Use greased spatula to evenly spread the toffee across your pan, you want your toffee to be super thin! Look how thin the toffee is in the picture of my churro toffee from Disneyland is! To do this though you will need to work quickly as the toffee starts to set almost immediately.

After you have spread your toffee across your pan, take knife and cut your toffee into nice even squares. You can measure if you like or just eyeball it. I got about 15 squares the same size as Disneyland makes their churro toffee.

Again, you’ll want to cut your toffee as soon as you’ve spread it across your pan because it sets so fast. And once it sets, it becomes much harder to cut and you’ll likely end up with some broken pieces. You’ll notice in the top left corner I had a piece that did not cut perfectly and broke, which isn’t a problem, I just coated the pieces individually and they tasted just as delicious! To coat your toffee you’ll want to use something like these melting wafers or candy melts. Using chocolate chips isn’t a great idea, the chocolate is difficult to melt nicely, where as these wafers are designed to melt and look nice!

Churro time—getting that cinnamon sugar on it!

Now for us, I’m not mass-producing churro toffee like Disney is, so making a giant tub of cinnamon and sugar isn’t realistic. But, I still did use their burying technique and found it be much more efficient at getting the cinnamon and sugar to coat evenly and stick to the white chocolate than some of the other methods I tried. But, because I can only put one piece of toffee in my churro sugar mixture at a time, I would bury each piece, let it sit for a minute or two until the white chocolate was sort of set and would then move it to another pan to cool and set completely. Now eat up, enjoy, and dream of that next Disney vacation!

Try these other tasty recipes: 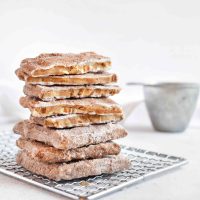 If you love all things DISNEY check out these other posts: Get Ready for Valentine's Day!