Restaurants all over New Orleans and many places in Louisiana serve bread pudding as a grand finale. It's a specialty dessert for many casual and fine dining spots. This white chocolate raspberry bread pudding with vanilla-caramel sauce is extra special.

I think of bread pudding as a Louisiana, or Southern dessert. It actually dates back centuries to Europe. Bread pudding got its start as a way to use up stale bread. Frugal cooks as far back as 11th and 12th century Europe tried to recycle old bread and give it new life. They created different variations of sweet or savory bread pudding. Today, although served around the South and all over the U.S., bread pudding is a dessert New Orleans has embraced and made its own. Bread pudding is similar to French Toast. Most bread pudding recipes start with day old bread soaked in a mixture of milk, eggs and sugar, then baked. The texture is soft and spongy. Recipes usually call for the bread to be soaked at least an hour; you can also soak it overnight in the refrigerator.

French bread is traditionally used in bread pudding. Tradition also says you must use stale bread. Bread pudding recipes were created as a way to use day-old bread. This kind of bread will also absorb more liquid (both custard and sauce) since it’s drier. If you have a new loaf, you can set it out on the counter a couple of hours to dry a bit, but honestly, I’m not sure it really makes a difference. Often I actually use a loaf purchased the same day with good results. To serve Bread pudding, slice it in squares or wedges, or pile it on a plate. Serve it warm covered in a rich sweet sauce. The bread base soaks up any sauce so each bite is filled with flavor. Pecans, walnuts or raisins often top or fill the pudding. (Our vanilla-caramel sauce is pictured above.) We add a raspberry sauce to finish our bread pudding recipe. It's fresh and delicious and gives a nice balance of tart and sweet. You can choose to strain out the raspberry seeds if you like.

Two sauces are even better! We love the combination of the fruit and caramel in this show-stopping dessert. You could also add a swirl of whipped cream to finish with a flourish. 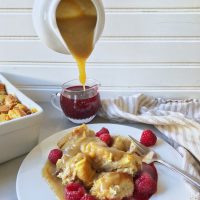 Try out these other fabulous Southern & Mardi Gras recipes!