"Throw me somethin' mister!" everyone yells as the parades pass by! And down fly beads, cups and other treasures. It's Mardi Gras season in Louisiana and the parades are rolling! Mardi Gras 101 will give you history and fun facts about New Orleans Mardi Gras along with links to some great recipes. Our family lived in Louisiana eight years. That means we lived through eight Mardi Gras seasons. Two of our kids were born in Baton Rouge and we experienced everything from Pre-School Mardi Gras Parades, baking dozens of King Cakes, catching thousands of beads and doubloons to attending some of the big parades in New Orleans. The kids are even out of school a couple days. Our family loves Mardi Gras. Many think of it only as wild debauchery, there’s that too. But there’s also a lot of culture and fun. Mardi Gras in Louisiana isn’t just a day. It’s a “season”.

Mardi Gras is a Christian holiday dating back to the 1700's in Italy and France. The season begins on January 6, which is known as “Twelfth Night" (12 days after Christmas) or Three Kings Day. By tradition, this is the day the three wise men brought gifts to baby Jesus.

Mardi Gras  lasts until “Fat Tuesday,” (Mardi Gras in French) which is the day before Ash Wednesday and the beginning of Lent (46 days before Easter.) It's considered the last chance to live it up and go all out before 40 days of religious commitment. This year Mardi Gras falls on Tuesday, March 1.

How Do You Know Which Tuesday Will be Mardi Gras?

Easter can fall on any Sunday from March 23 to April 25, with the exact date to coincide with the first Sunday after the full moon following a spring equinox. Ash Wednesday is always 46 days before Easter, and Fat Tuesday is always the day before Ash Wednesday. Find a calendar with Easter printed on it; count back 46 days and you'll find Mardi Gras! So there you have it!

Here's a list of Mardi Gras dates for the next few years: What is a King Cake?

The festive Mardi Gras season is celebrated in lots of ways. King Cakes appear in the bakeries. Many families and offices all over Louisiana celebrate with a King Cake each week during the season. The King Cake is like a large cinnamon roll formed into a wreath. The cakes are filled with the traditional cinnamon and sugar, or other delights such apples, cherries, cream cheese, pralines, etc. Once baked, the cake is iced and then dusted with glittering sugars in the Mardi Gras colors of Green, Purple and Gold. They can even be draped with beads, the gaudier the better. What a sight!

Who will find the baby?

Tucked inside each King Cake is a small plastic baby, representing baby Jesus. It’s special to be the one who gets the baby! At many offices, some brings in king cakes each week during Mardi Gras season. Whoever finds the baby, gets to bring the cake the next week. At our house, we said you were the Mardi Gras King if you found the baby! Parades usually begin a couple of weeks before Mardi Gras day. You have never seen anything likes these parades! We found that the farther from Mardi Gras day the parade, the calmer it was. Our family often trekked down to Metairie (suburban New Orleans) about 10 days before Mardi Gras for the Krewe of Caesar’s parade. Some of the parades having been going for decades. There are approximately 75 different parades rolling in the New Orleans area each year. You can find the New Orleans Parade Schedule  here. (Note: 2021 parades have been cancelled due to COVID-19. The link will show you last year's schedule.)

What is a Krewe?

Parades are put on by organizations called Krewes, who who ride in, create, fund and execute them. A "super krewe" is a krewe featuring a large-scale parade with celebrity guests and more elaborate throws. The super krewe parades are Bacchus, Endymion and Orpheus. Harry Connick Jr. started the Krewe/parade of Orpheus in 1993. A parade dedicated to music, you can find out more by visiting the website for Krewe of Orpheus.

There are fabulous floats where masked and costumed Krewe members throw Mardi Gras colored beads and doubloons (coins). Check out the racks of beads stacked along this float above, and notice there are two levels of Krewe members! There are other things to catch like swords and stuffed animals too! Everyone is waving and yelling “Throw me somethin’ mister!” Sometimes little kids dress up and sit on parents’ shoulders (check out Alyssa in her red cape above) hoping to attract more attention from the Krewe members and garner a better toy! What did you catch?

Once home, the parents wonder why we wanted all those beads? But along the parade route--in the heat of the moment--it's so exciting to catch beads, beads, and more beads! Our son Scott liked to bring home his stash and sort it like Halloween candy! Everyone gets into it from the old to the young, like our almost one year old Ryan above.

By the time Fat Tuesday arrives in the French Quarter of New Orleans, things are heated up and the crowds can be out of control. Mardi Gras morning, the parade of “Rex” starts Uptown at 10 a.m. and rolls down St. Charles Avenue, ending on Canal Street near the French Quarter. There are formal Mardi Gras Balls and other events that draw big name entertainment and stars as parade marshals.

What is a parade Marshal? Mardi Gras colors are purple, gold and green. Our six year old David and his friend Jack just returned from a Mardi Gras day at school sporting traditional Mardi Gras colors above. EVERYTHING associated with Mardi Gras is purple, gold or green! The beads at the parades, the doubloons, the masks, the King Cakes, the banners on the street--you get the idea! The specific colors for Mardi Gras originated with the Krewe of Rex in 1892. The Rex parade theme "Symbolism of Colors" gave meaning to the colors: purple represents justice; gold is for power; green symbolizes faith. These colors have been used ever since.

While we love Mardi Gras, we don't recommend visiting New Orleans on Mardi Gras day. It's a lot too crazy for us. You can still catch the flavor of Mardi Gras when you visit New Orleans by riding the (free) ferry across to the West Bank and visiting Blain Kern's Mardi Gras World. Many of the best Mardi Gras floats have been created here for years--and you can see them! Do a google search for various discount codes. So go before, or go after the big day. (Note: Although Mardi Gras parades have been cancelled for 2021, you can still see amazing floats and get the feel for the parades at Mardi Gras World.)

This week we’re going to share some favorite Mardi Gras facts and recipes. We hope you’ll join us to get into the spirit. As they say in Louisiana “Laissez Les Bons Temps Rouler!” (Let the good times roll!) 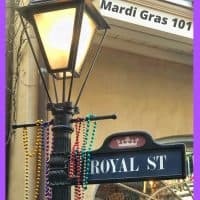 A fun article with history and tips about Mardi Gras in Louisiana.
5 from 1 vote
Print Rate
Cuisine: European
Author: Dianna--In Fine Taste
Prevent your screen from going dark
Share by Email Share on Facebook Share on Twitter
Tried this recipe? Leave a review below, then take a picture and tag us @InFineTaste on Instagram so we can see!