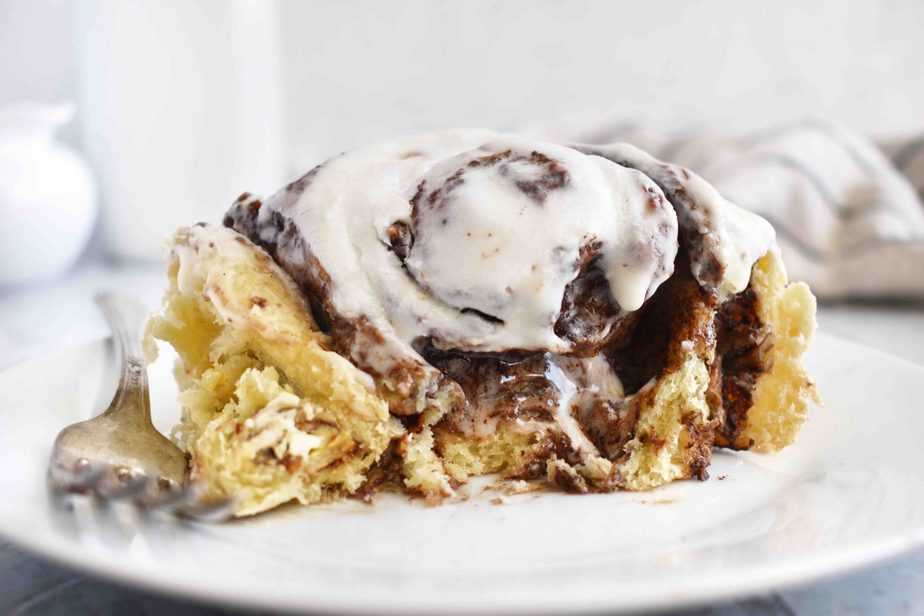 These chocolate pecan cinnamon rolls are soft and gooey with a buttery and spiced chocolate filling, chopped pecans, and lots of melty cream cheese frosting on them. They’re easy to make right now, or make them the night before and bake in the morning for a delicious breakfast!

These chocolate pecan cinnamon rolls aren’t hard, but they do take a little bit of time. You start by making a basic enriched dough—yeast, sugar, milk, butter, eggs, salt, and flour. Knead the dough into a smooth ball, let it rise, and roll out your dough into a large rectangle. Spread your chocolate-cinnamon filling, roll the dough up, slice, and let rise a second time. Bake, slather in cream cheese frosting, and devour!

Got more questions? Watch us make them in our video below and keep reading to answer all your baking questions!

Why aren’t my cinnamon rolls rising?

There could be a couple reasons why your cinnamon rolls aren’t rising:

1. You might have killed the yeast.
When you place your yeast in the milk make sure the milk isn’t too hot. The milk should be warm, but not hot. If it the milk too hot, there’s a chance you killed your yeast. Salt is also a yeast inhibiter. We add the salt in with the cinnamon roll dough ingredients only after we’ve let the yeast bloom. If you add the salt in with the milk and sugar, it will slow down or completely stop the yeast’s ability to rise.

My #1 trick for getting my cinnamon rolls to rise:
Like we said above, yeast loves the warmth, and your cinnamon roll dough will rise best when they’re in a warm place. So, I like to turn my oven on to as low as it will go, mine is 170 degrees Fahrenheit (most ovens will go as low as 200 degrees Fahrenheit). Let the oven preheat, then turn the oven off, and pop your covered dough inside to rise!

How to get perfect cinnamon roll spirals 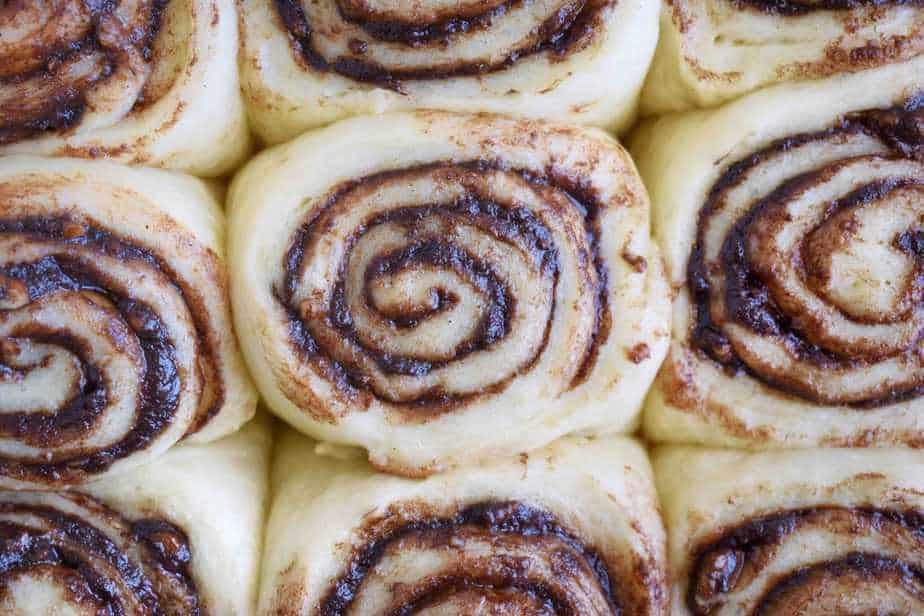 This might seem like a silly question, but after all the effort you put into making these chocolate pecan cinnamon rolls, I’d hate for a dull knife to mash your rolls and give you less than picture perfect cinnamon rolls.

Use a very sharp knife. You’ll want to use a super sharp knife; if it isn’t sharp it’ll just smash your rolls.

Use a serrated knife. If you have any doubts about the sharpness of your knife, a serrated knife a safer bet. Remember to be gentle and try not to smash the cinnamon rolls.

Use dental floss or thread. Dental floss or thread is a great way to get a nice clean cut without worrying about the dough sticking to the knife. I usually recommend using unflavored floss so you don’t get any lingering flavors. Though, the last time I made these I could only find cinnamon floss, but I figured that flavor would be all right, after all, these are cinnamon rolls! 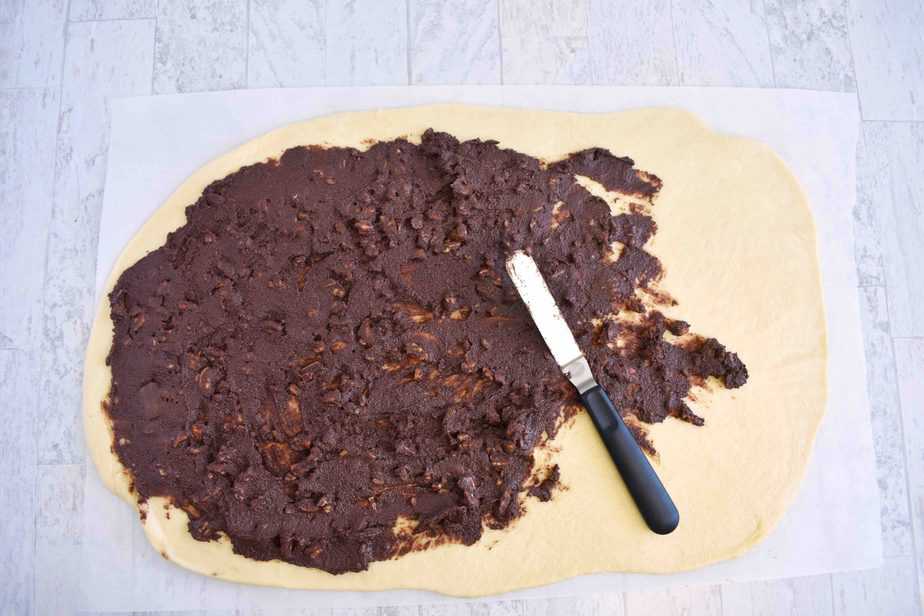 You might notice in the picture above that the pecans are mixed straight into the filling with the butter, brown sugar, and cinnamon. That’s because that’s how I used to make these. But, I’ve realized it is much easier to spread the filling on with out the pecans in the filling and to just sprinkle the chopped pecans on afterwards. Just take my word on that.

How to make cream cheese icing for cinnamon rolls

To make this cream cheese icing, start by creaming together butter and cream cheese until smooth, then add in your vanilla, salt, and powdered sugar. If at first it seems like there is too much powdered sugar, keep going! It will mix in eventually!

Do I need a stand mixer? Can I knead the cinnamon roll by hand?

While your dough will be quite sticky when you start kneading it, by the end it should just be a little tacky, and have a smooth and elastic feel to it.

If you do not knead your dough enough then the bread dough will not have a good structure and there’s a chance it will collapse on itself after it bakes.

I get it, these chocolate pecan cinnamon rolls take a couple hours to make start to finish and they are definitely best, warm and fresh! Luckily, you can make them ahead of time!

After you slice your cinnamon rolls and place the in their pan, cover them and pop them in the fridge for up to 24 hours. You can even freeze them and then defrost them in the fridge! Then, in the morning, place them somewhere warm and let them rise until they’ve doubled in size. Then, bake!

How to reheat these Chocolate Pecan Cinnamon Rolls

Cinnamon rolls always seem a little dry to me they day after, so warming them always makes them seem moist and gooey again. I like to microwave them for around 10-15 seconds, but every microwave is a little different so keep your eye on them! 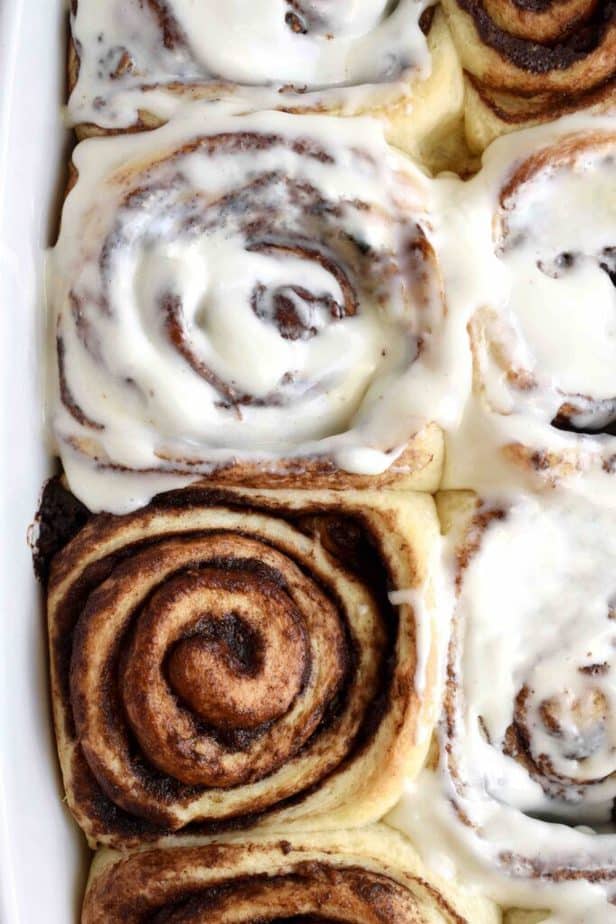 Check Out these other Delicious Brunch Ideas: 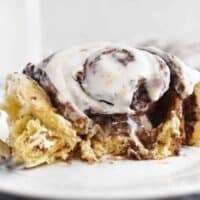 These chocolate pecan cinnamon rolls are soft and gooey with a buttery
and spiced chocolate filling, chopped pecans, and lots of melty cream cheese
frosting on them