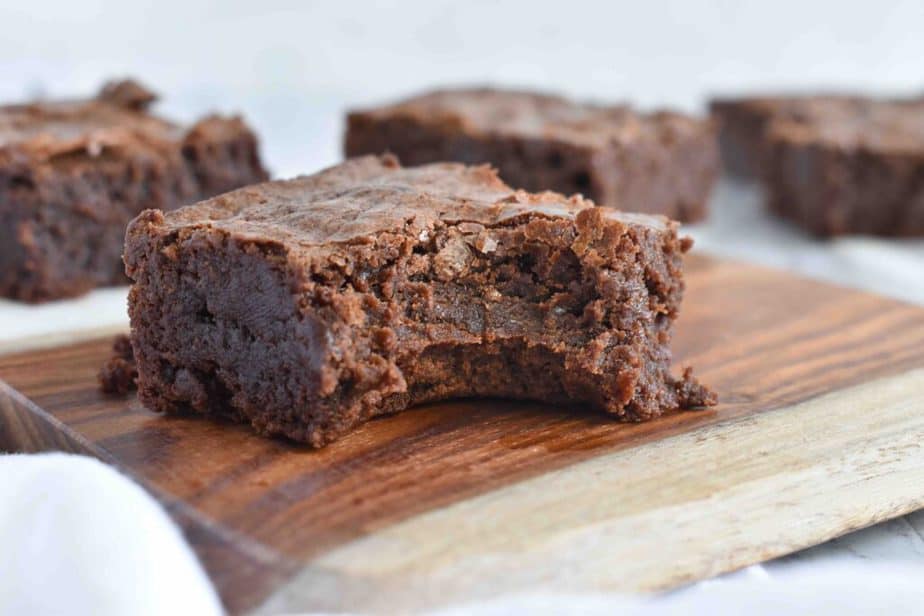 Rich, decadent, super fudgy, just the right amount of chewiness—these are the best fudge brownies you’ve ever made! No other recipes needed! 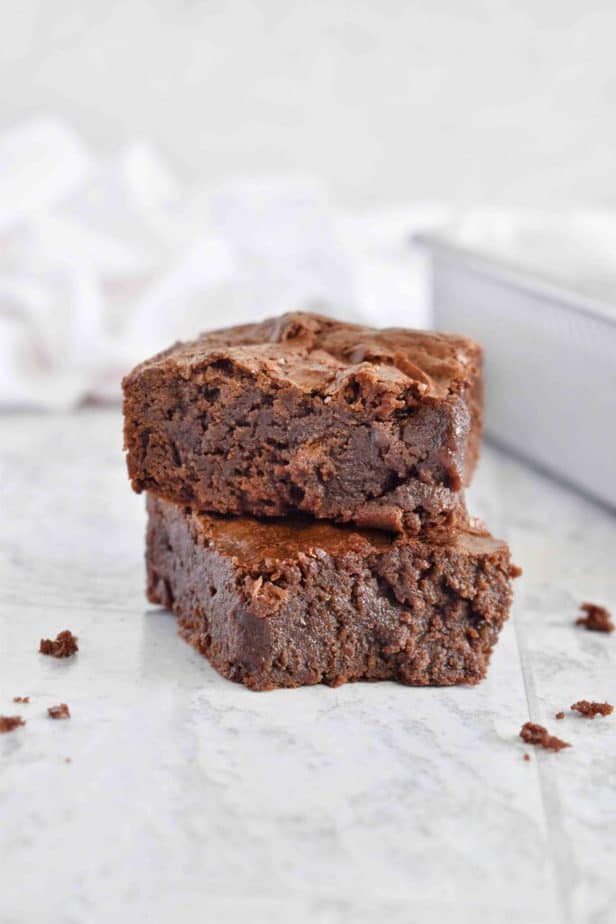 I (slightly) adapted this recipe from the famous pastry chef, Nick Malgieri's Supernatural Brownies recipe. When I first tried his recipe I adored the texture—dense, fudgy, that shiny, crinkly top—but for me I found that the I wanted a richer chocolate flavor. The original recipe calls for 60% dark chocolate (semi-sweet chocolate), but I found this gave the brownies too much of a milk chocolate flavor.

So, I played around with a few different ratios of chocolate until I landed on the perfect combination (at least to my taste buds) of baker’s unsweetened chocolate and semi-sweet chocolate. I also added a bit more salt, because…salt… a little extra salt makes everything better. This gives these supernatural brownies a rich, but not too dark chocolate flavor—the perfect flavor for these ultra fudgy brownies

How to Make Brownies From Scratch

Don’t let the idea of getting a pot out to melt the chocolate and butter to make these brownies deter you! They’re fast and easy, not hand mixer needed, and it can all be made in the same pot you melt the butter and chocolate in!

A One Pot Brownie Recipe

These easy homemade brownies are the absolute best! And they really are super easy!

Then, remove your mixture from the heat and whisk in your eggs, one at a time. Your batter is going to looks smooth and glossy right about now. Then add in your salt, vanilla, and flour. Pour it into your greased, and parchment lined baking pan and bake!

Optional: Add Some Mix-ins—Chocolate or Nuts!

So I’m kind of a purist when it comes to my brownies, I prefer them without extra chocolate chips or nuts. But I know most people love some extra chocolate or chopped pecans or walnuts in their brownies! And if you fall into that category, no problem, add them in!

After you add in the flour, you’ll want to gently fold in 1-2 cups of chocolate chips or chopped nuts, depending on how much you like in your brownies. 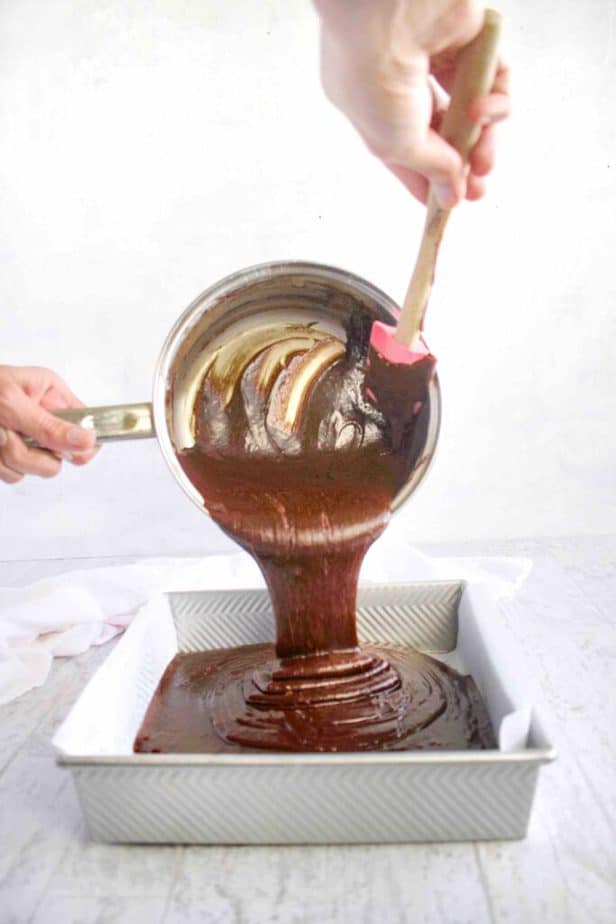 Thick or Thin: Make these brownies in a 9x9 or 9x13 inch pan

Thick or thin brownies? I’m all about those thickkkk brownies you see in the pictures! Sometimes you want to make a larger pan (easier to share that way!).

If you’re making these brownies in a 9x9 inch pan, you’ll want to preheat your oven 325 degrees Fahrenheit, and bake your brownies for 35-40 minutes. Remember, each oven is a little different, so I always suggest going for less time to start. You can always bake it for longer if needed!

If you’re making these brownies in a 9x13 inch pan, preheat your oven to 350 degrees (notice the temperature difference on the two), and bake your brownies for 30-40 minutes.

You could probably double this recipe and bake it in a 9x13 pan, for a larger pan of extra thick brownies. This would change the bake time, and I personally haven’t tested it out, so I can’t give you a recommendation on how long to bake it for. 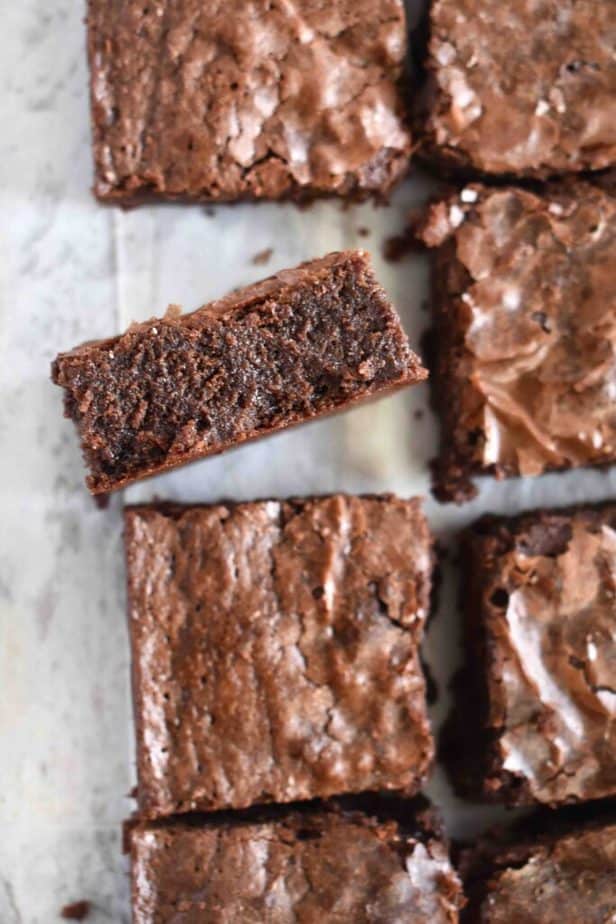 How to Make Brownies More Fudgy

There are three types of brownies: cakey, chewy, and fudgy. If you’re reading this post, I am going to assume you’re chasing after that perfectly fudgy brownie. Now these brownies does have a bit of crossover—they are ultra fudgy, but have the perfect amount of chewiness to them. But what makes brownies fudgy? I felt like I spend years making recipe after recipe, trying to find that perfect fudgy brownie.

One thing, I learned while testing a dozen different recipes is that no cocoa powder = a fudgier brownie. Melting butter and chocolate together as the base for your fudge brownies creates a rich liquid chocolate, which is exactly where we want to start for our fudgy brownies.

No Baking Soda or Baking Powder

Next, you’ll notice we don’t use any baking soda or baking powder in this recipe. We don’t want to create extra rise in these brownies, which would result in a cakier brownie.

Don’t Add Too Much Flour

Too much flour is one of the biggest culprits of a cakey or dry brownie. If you are not measuring your flour properly, it is super easy to add too much flour. If you have a food scale, I recommend weighing your flour. This recipe only calls for 1 cup of flour (or 135 grams), which isn’t a whole lot—ideal for our fudge brownies! If you don’t have a food scale, I recommend you check out our post on How to Measure Flour Correctly  After all, you don’t want a silly thing like a little extra flour to destroy your perfect brownies.

Don’t Over Beat your Batter

Fudgy brownies are dense! Which means we don’t want any extra air whipped into the brownie batter. Extra air while give these a cakier texture—exactly what we don’t want. So just mix your batter enough to get your ingredients incorporated. We want to keep them dense and tender.

Don’t Over Bake Your Brownies

With fudge brownies you really want to maintain that gooey center. Remember: we’ve got molten chocolate and butter as the base of our brownie. So make sure you do not over bake those brownies, so they keep that rich, gooey, fudgy center you came here for. 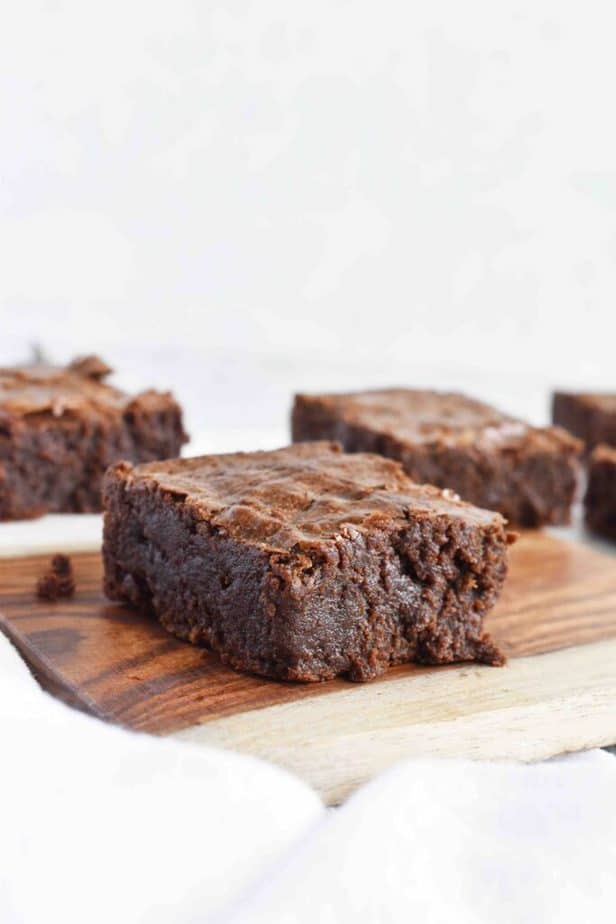 How to tell if your fudge brownies are done

We told you, Don’t over bake your brownies! But brownies aren’t like cake, they’re a little harder to tell when they are done and it is time to pull them out of the oven.

So how can you tell when your fudge brownies are done? You want your center to be gooey, but not raw batter (though I’m not really opposed to that, the batter is delicious!). You can use the a toothpick to check the center, moist crumbs or a little stickiness on the toothpick is okay! In my opinion, it is better to under bake your brownies than to over bake them! Because dry brownies….no thank you. And just remember, your brownies will continue to set up as they sit in their hot pan and cool. 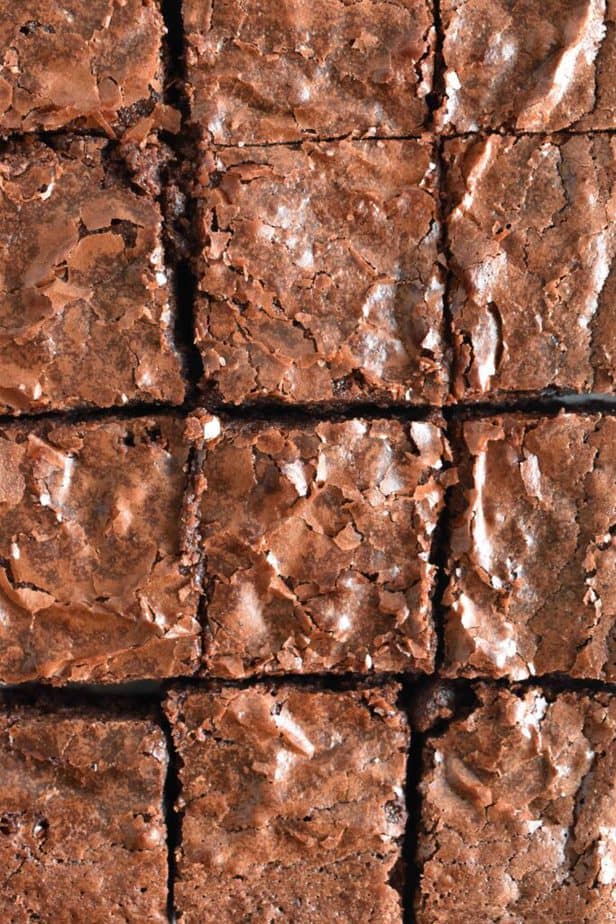 That crinkle-top is created when you add your sugars into your warm chocolate-butter mixture. Letting the sugar crystals melt and meld with the butter and chocolate is the key to that shiny top. Notice, were using butter, not oil, in this recipe. The butter is necessary for that glossy, crackly crust

Pro-tip for getting max shiny, crackle-top brownies: Add your eggs one at a time and mixing it in until glossy, before adding the next one. Then, when adding the flour, only mix until it is fully incorporated—but don’t over mix it! 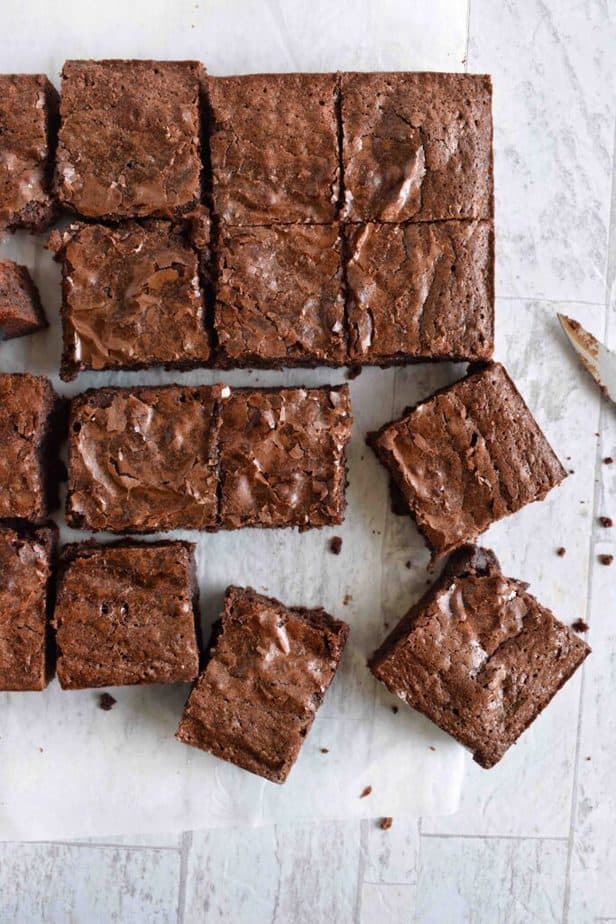 Do I really need wait before eating these brownies?

I highly recommend cooling, then covering your brownies and waiting until the next day to eat them. This maximizes the fudginess and flavor of the brownies.

It sounds weird, but it I swear, it is night and day difference in the flavor and texture of the brownies. If you’re in a rush, cover and chill them in the fridge for a few hours at least before eating them.

How long do these brownies last? Can I freeze them?

These brownies are best eaten within three days. Remember to cover them with plastic wrap when you’re not eating them!

You can absolutely freeze these! I like to wrap each brownie individually in plastic for quick and easy treat you can pull out of the freezer. They’ll stay good in your freezer for 3 months; just remember to thaw them first. 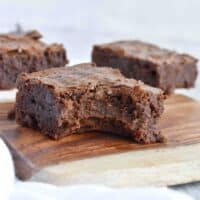 Rich, decadent, super fudgy, just the right amount of chewiness—these are the best fudge brownies you’ve ever made!